Gods of Egypt director and studio apologise for lack of diversity

‘In this instance we failed to live up to our own standards of sensitivity and diversity’ … the director of Gods of Egypt, Alex Proyas. Photograph: Evan Agostini/AP

The director and studio behind forthcoming fantasy film Gods of Egypt have apologised for casting mainly Caucasian actors.

Alex Proyas and Lionsgate issued statements to Forbes admitting the decision to hand white European actors such as Gerard Butler, Brenton Thwaites and Nikolaj Coster-Waldau the roles of duelling Egyptian deities and mortals had been a mistake. The move follows rampant criticism from celebrities including Bette Midler, and on social media.

Proyas, the director of The Crow, Dark City and I, Robot, said: “The process of casting a movie has many complicated variables, but it is clear that our casting choices should have been more diverse. I sincerely apologise to those who are offended by the decisions we made.”

Lionsgate added: “We recognise that it is our responsibility to help ensure that casting decisions reflect the diversity and culture of the time periods portrayed. In this instance we failed to live up to our own standards of sensitivity and diversity, for which we sincerely apologise. Lionsgate is deeply committed to making films that reflect the diversity of our audiences. We have, can and will continue to do better.”

Movie, #GodsOfEgypt in which everyone is white? Egyptians, in history and today, have NEVER been white. BRING BACK GEOGRAPHY!! It's Africa!

The apologies are remarkable, especially given that Gods of Egypt does not debut in cinemas until 26 February and could now suffer at the box office. The film has also faced criticism for casting the star of Get On Up, Chadwick Boseman, as god Thoth, with Twitter users suggesting the character’s appearance in posters feeds into the “magical negro” stereotype. 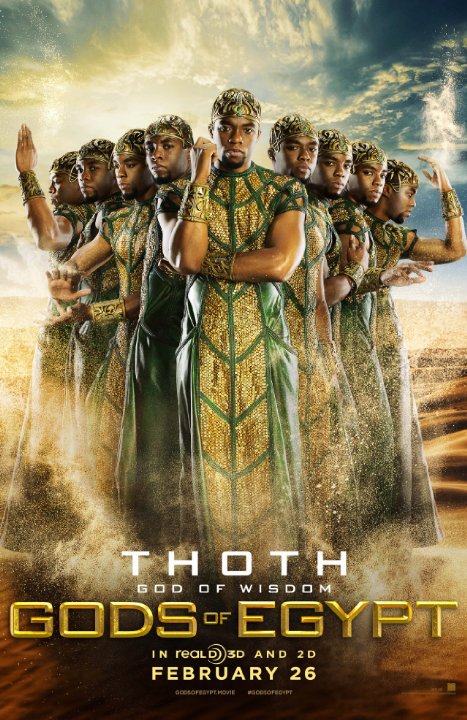 The controversy over casting for Proyas’ movie follows criticism of biblical epic Exodus: Gods and Kings last year. Ridley Scott’s film was blasted for casting white actors including Christian Bale, Joel Edgerton and Sigourney Weaver in the story of Moses and the Israelites’ flight from Egypt.

In June, director Cameron Crowe was forced to apologise for casting the white actor Emma Stone as a “part-Asian” Hawaiian in controversial “whitewashed” romance Aloha. The movie also bombed at the box office, with just $26.5m worldwide, after picking up derisive reviews.

Ava DuVernay, director of the civil rights biopic Selma, took to Twitter to celebrate the latest apology, labelling it “an unusual occurrence worth noting”. She also praised Star Wars: The Force Awakens and Rocky spin-off Creed for making considered choices on diverse casting.

This kind of apology never happens - for something that happens all the time. An unusual occurrence worth noting. https://t.co/xRTEy7woWs

GODS OF EGYPT makes me value Abrams' STAR WARS choices more. Makes me cheer more for Coogler's CREED. We all deserve icons in our own image.

Incredible recovery of Nigerian 'witch child' who was left for dead

Why are people arguing about 'Black Girl Magic'?

Afro news around the web

Find your purpose for fulfilment

R. Kelly Performs In North Carolina Amid Protesters And Rubs Cell Phone Between His Legs In Defiance

Londoners embark on ‘The Big Walk’ to celebrate community

The homeless young mother who turned her life around